ABCD - Sorry What did you Say (Acronym Guide for Toastmasters) 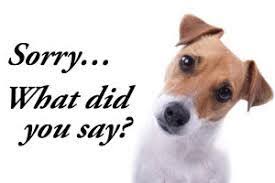 WOD, PQD, PM1, DCP, DTM… what? If you’ve ever felt confused or overwhelmed by the Toastmasters Alphabet Soup of Acronyms, then keep reading. This list is a recipe for Toastmasters acronym success!

AC: Advanced Communicator (ACB, ACS or ACG) — someone who has achieved at least an ACB (ATM-B).

ACS: Advanced Communicator Silver (formerly ATM-S) — award given to an Individual who has achieved ACB or ATM-B, has completed two additional Advanced Communication & Leadership Program manuals, and who has conducted any two programs from the Better Speaker Series and/or the Successful Club Series.

AD: Area Director (formerly Area Governor)— Serves as a liaison between the district and its clubs via semiannual area club visits to understand how clubs are fulfilling member needs and how the district is supporting each club.

AL: Advanced Leader (ALB or ALS) — someone who has achieved at least an ALB (ATM-B).

ALB: Advanced Leader Bronze — award given to an individual who has achieved CL and CC or CTM, served at least 6 months as Club officer (and was trained as such during that period) and has conducted any two program modules from the Successful Club Series.

ALS: Advanced Leader Silver — award given to an individual who has achieved ALB, completed a term as a district officer, completed the High Performance Leadership Program, and served successfully as a Club Sponsor, Mentor, or Specialist.

CJ: Chief Judge — the individual who is in charge of ensuring that rules are followed at speech contests.

CTM: Competent Toastmaster — award designation prior to 7/1/06, replaced by CC.

DCP: Distinguished Club Program — a set of 10 goals each club strives to meet between July 1 — June 30 of the following year. A club’s ability to meet these goals is directly related to the overall health of the club.

DPR: District Performance Report — a report that gives an overview of the progress a District is making in it’s leadership/training goals.

DTM: Distinguished Toastmaster — an individual who has achieved both ACG (ATM-G) and ALS (AL) distinctions; the top award earned in the Communication and Leadership Tracks.

DC: District Council— a team of officers that work behind the scenes to help a club/District achieve goals and run smoothly.

GE: General Evaluator (meeting role) — evaluates a Toastmasters meeting and evaluates the Speech Evaluators, if any.

HPL: High Performance Leadership project/award — Featured in the Pathways learning experience or it’s own 5-project series. It offers instruction and practice in such vital leadership areas as developing a vision, goal-setting and planning, developing plans and strategies, and team-building. It also gives you feedback on your leadership skills. The program may be completed within your Toastmasters club, area or district, and even within your company or community. A requirement to achieve the ALS or a Pathways level.

IPDD: Immediate Past District Director (District role) — once a District Governor’s term is over, their role is to advise the incoming Trio and to head up the nominations committee for the next term and are acknowledged at events as a dignitary.

IPID: Immediate Past International Director (International role) — once a PID’s term is over they become an IPID, acknowledged at events as a dignitary.

IPIP: Immediate Past International President (International role) — once a PIP’s term is over they become an IPIP, acknowledged at events as a dignitary.

OATM: Outstanding Achievement Toastmaster Award — an award based on a point system given once a year.

PDG: Past District Governor (or Past District Director, District designation) — once an IPDG’s term is over, they are thereafter acknowldedged at events as a dignitary.

PID: Past International Director (International role) — once a PID’s term is over, they become a PID and are acknowledged at events as a dignitary.

PIP: Past International President (International role) — once a PID’s term is over they become a PIP and are acknowledged at events as a dignitary.

Pres: President (club officer role) — responsible for providing the supportive club environment members need to fulfill their self-development goals, making sure that members benefit from the Toastmasters educational program, and helping the club recruit new members and retain current ones.

PRM: Public Relations Manager (District role) — responsible for all District public relations efforts and supporting the goals of the Trio.

PWCPS: Past World Champion of Public Speaking — designation for a person who won the WCPS at least one year previous to this.

RA: Region Advisor — Works with District leaders to build a stronger District. There are several Districts within each Region.

Sec: Secretary (club or District role) — keeps clear and accurate records of club/district business, including membership records, and corresponds with Toastmasters International’s World Headquarters and others on behalf of the club/District.

TM: Toastmaster (meeting, contest or other event role) — master/mistress of ceremonies who sets the tone and introduces speakers and others who have meeting roles.

TMT: Toastmasters Time Television — a specialty club in District 57 that tapes speakers and publishes them on YouTube.

TT: Table Topics (meeting activity) — a meeting feature in which a TTM picks TTS’s to speak for 1-2 minutes on assigned topics.

TTM: Table Topics Master (meeting role) — runs the TT portion of a meeting by creating topics and picking TTS to speak on them.

TTS: Table Topics Speaker (meeting role) — exercises impromptu speaking skills by speaking for 1-2 mintues on a topic, ideally incorporating the WOD, if any.

VPM: Vice President Membership (club officer role) — responsible for building membership and ensuring a strong membership base by satisfying the needs of all members.

WCPS: World Champion of Public Speaking — an individual who won the annual speech competition at the International Convention.

WOD: Word of the Day (as selected by the Grammarian or other designated person) — a word that all persons with speaking roles try to use in a meeting.

Thanks to District 4 for the links about each path in Pathways - first initial of each word followed by 1,2, 3 or 4 shows levels completed.  example DL1, DL2, DL3, DL4.

- How to guide for your club
30 Tips and Tricks for Hosting a Successful Online Event
ABCD - Sorry What did you Say (Acronym Guide for Toastmasters)
Guidelines: Get Started with Online Club Meetings
How to add your Club to Google Maps
RENEW NOW! Tips for Dues Renewals April-Oct 2020
SEO Suggestions for your Toastmaster club Websites

Distinguished Club Program (DCP)
What is the Member Progress Card?